Self-driving cars race against each other in Hervanta 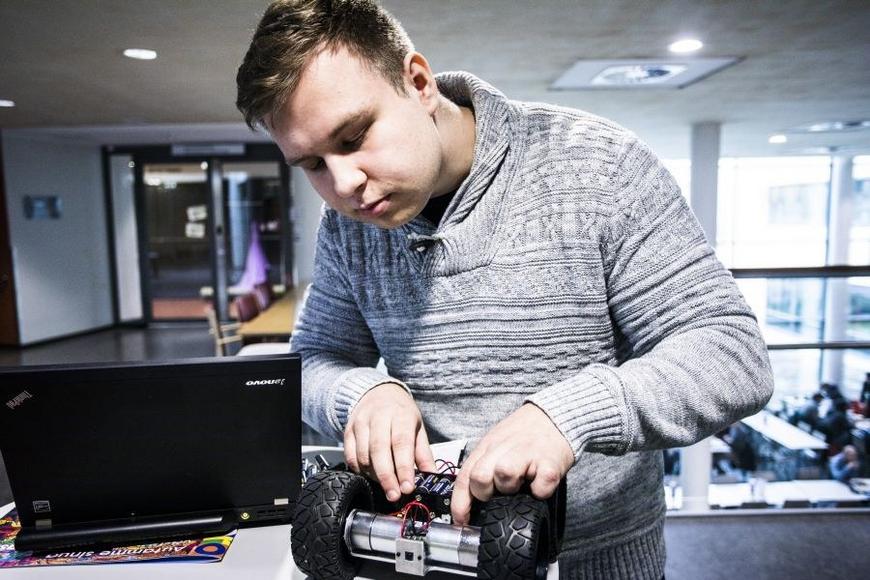 Mike Salmela kehittää ohjelmistoa, jonka avulla auto oppii ajamaan itsenäisesti.
Students are developing self-driving cars for a race on the Hervanta campus. A programmer shows the car a model performance, after which the car learns it independently through trial and error.

A small racetrack is found on the second floor of Tietotalo on the Hervanta campus. The track has been erected for self-driving MonsterBorg cars.

Signal processing students do the programming, and the final test race will be organised by the end of the year. Mike Salmela is one of three students to enter the competition. Salmela is also writing his bachelor's thesis on the project.

We have been working with these cars for two months. We have used the race track, but our work begun with a computer simulator,” Salmela says.

Computer simulation is an integral part of the project: cars learn how to navigate the race through trial and error, and the lessons learned can be transferred to the track later.

In the simulation, the car starts its journey on the track by making completely random movements. An algorithm rewards the car when it improves its take on the turns of the track. This reinforced learning can be found in the background of many artificial intelligence applications.

“The simulation captures all the movements of the car. Slowly, the car begins to understand what it needs to do. However, the car makes random movements all the time, which help it to learn as it gets feedback on its movements,” Salmela explains.

The car navigates only with a camera

The cars have only one sensor: a small camera mounted on the front. The image allows the cars to follow the yellow dashed line in the middle of the track.

First, the programmer shows the model performance with the car.  After that, the car begins to learn how to move independently through trial and error.

“There are two ways to speed up the learning of a self-driving car. The first option is to show it a model of good performance. The other is to use computer simulations. Mike has used both options,” says researcher Nataliya Strokina.

Salmela’s programming is still in progress. In a brief demonstration, the car set off steadily but soon fell off the track. Upon rediscovering the yellow dashed line, the car returned to the right lane for a moment before losing its way again.

The result would probably have been better, but due to the memory limitations of the computer, an earlier version of the programme was used.

“The current goal is to increase the stability of the car. The aim is to keep it as close to the yellow line as possible. We will aim for more speed later,” Salmela explains.