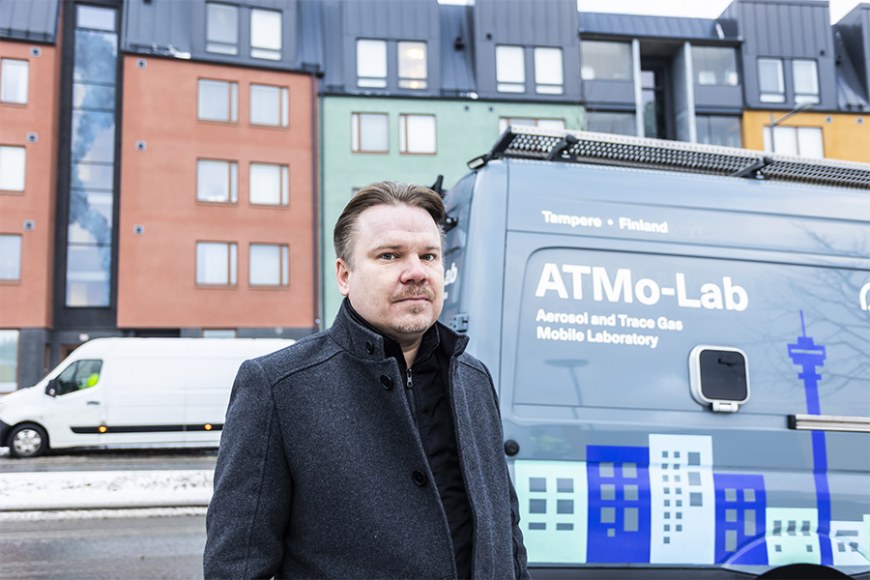 The mobile laboratory has been used in several studies led by Topi Rönkkö. It allows the study of aerosols in real environments and, for example, the so-called chasing type study of automotive exhaust gases. Currently, the mobile laboratory can be seen on streets of Tampere, early next year it will be used to study air quality in Helsinki, Düsseldorf and Prague. Photo: Jonne Renvall / Tampere University.
Topi Rönkkö, recently appointed professor of aerosol physics at Tampere University, studies the health and climate effects of atmospheric aerosols. His research interests cover black carbon and other emissions generated by traffic, power plants and industry as well as viruses that spread through the air. He is currently developing a concept for a black carbon footprint.

“We conduct experimental studies on aerosols to shed light on the formation of particle emissions, their subsequent transformations in the atmosphere and their impact on air quality, human health and climate,” Rönkkö says.

Rönkkö’s research group participates in many research projects and maintains close collaborations with researchers in Finland and abroad. Among other things, the group is currently participating in a three-year Black Carbon Footprint project, which is conducted by a multidisciplinary consortium involving academic, company, and municipal partners.

Black carbon emissions have impacts on climate and human health

Although the main reason for global warming is carbon dioxide, some studies indicate that black carbon, more commonly known as soot, is the second biggest cause. Of all particle emissions, black carbon warms the atmosphere the most because it absorbs solar energy. Black carbon particles can undergo transformations in the atmosphere which can increase either their warming or cooling effect.

Black carbon is especially generated by traffic and industry, and the airborne particles can travel vast distances. When black carbon settles onto glaciers, it speeds up the melting of ice. The particles can also find their way into the human body through the respiratory system. Wood burning is a significant contributor of black carbon emissions.

“In Finland, residential wood burning is a relatively large source of black carbon. Residential combustion appliances have no flue gas cleaning technologies that reduce emissions and wood may not necessarily burn cleanly and efficiently, and consequently harmful aerosols are released directly into the atmosphere, whereas large-scale combustion power plants in Finland are usually equipped with efficient flue gas cleaning technologies that affect also the black carbon emissions ,” Rönkkö notes.

Diesel cars have been demonised for their emissions, but the accusations are unfounded at least as far as black carbon is concerned. Well-maintained diesel cars that are built to meet the latest emission standards are not a source of black carbon. Still, diesel engines can generate other harmful emissions.

Soot is a major health hazard especially in cities and industrial areas where a large number of people are exposed to it. Soot particles can carry a variety of toxic compounds, and the ultrafine particles can penetrate deep into the lungs and even pass through into the bloodstream. Black carbon is associated with numerous diseases and premature deaths worldwide.

Developing method for the evaluation of black carbon footprint

“The understanding of the factors affecting black carbon footprint is challenging due to the complex processes. We need to create a sufficiently simple concept that captures not only the complexity of our world but also the impact of black carbon on climate and human health,” Rönkkö points out.

The use of the black carbon footprint concept will have global potential, Rönkkö finds.

“This is an ambitious project and unique even on a global scale, at least as far as we know. Our goal is to the have the first version of the concept completed over the next few years,“ he says.

Rönkkö is happy with all the milestones the team achieves because the project, an extensive undertaking to begin with, appears to become more complicated with each step.

“We are continuously generating new and important fundamental knowledge of soot emissions and their effects, which opens up new opportunities for the development of useful applications,” Rönkkö says.

The research results could be applied, among other things, in the development of motor vehicle inspections and the measurement of emissions from different sources (such as wood burning, cars, vessels, power plants and airplanes).

Topi Rönkkö has a long history of working in academia. He studied and has spent practically his entire career so far working in the Physics unit of the Faculty of Engineering and Natural Sciences (ENS) at Tampere University or its predecessors. Rönkkö earned his Master of Science in Technology degree in 2003. After completing his doctoral degree in 2009 – Rönkkö wrote his dissertation on the measurement of vehicle emissions – he continued the research at ENS. Rönkkö took up his appointment as professor of aerosol physics on 11 October 2021.

Throughout his career, Rönkkö has a been busy conducting research, teaching, learning to operate in new environments, building contacts and setting up projects.

“Keeping busy and getting things done is what inspires me. The impact of my work and the chance to contribute to addressing great global challenges is a major source of motivation. It is difficult to imagine more far-reaching research themes than climate change and pandemics,” he says.

The Covid-19 pandemic brought on new challenges that researchers must address so we can also control the airborne transmission of other infectious diseases and reduce air pollution.

“When we carry out research, we always learn new things, generate new expertise and educate new professionals. The students we train can eventually multiply the impact of our research. It is exciting to be a part of training a new generation of specialists,” Rönkkö says.

Besides spending time with his family, Rönkkö enjoys playing padel with his friends in his free time; the sessions often start at 6.30 in the morning so everyone can fit them into their busy schedules. The same group of friends has also been running a reading circle called Vedenkantajat (Water Carriers) for years. The reading circle has been an eye-opening experience.

“We read and analyse both new books and old classics. Lately, we have mainly focused on the classics. The latest book we read was Kalevala. I warmly recommend it! This national epic, which all Finnish people know at least by name, was an impressive experience as an eBook,” Rönkkö says.

Besides studying black carbon, Rönkkö and his research group are involved in three large-scale research projects that focus on air. Their latest project is a massive undertaking that goes by the name of E3 (Excellence in Pandemic Response and Enterprise Solutions Co-Innovation) and seeks ways to prevent the indoor airborne transmission of viruses and infectious diseases during pandemics. Other projects that are currently underway include Future Spaces, which explores the healthy and sustainable renovation of buildings, and the TUBE project (Transport derived Ultrafines and the Brain Effects), which studies traffic emissions that are linked to an increased risk of Alzheimer’s disease. 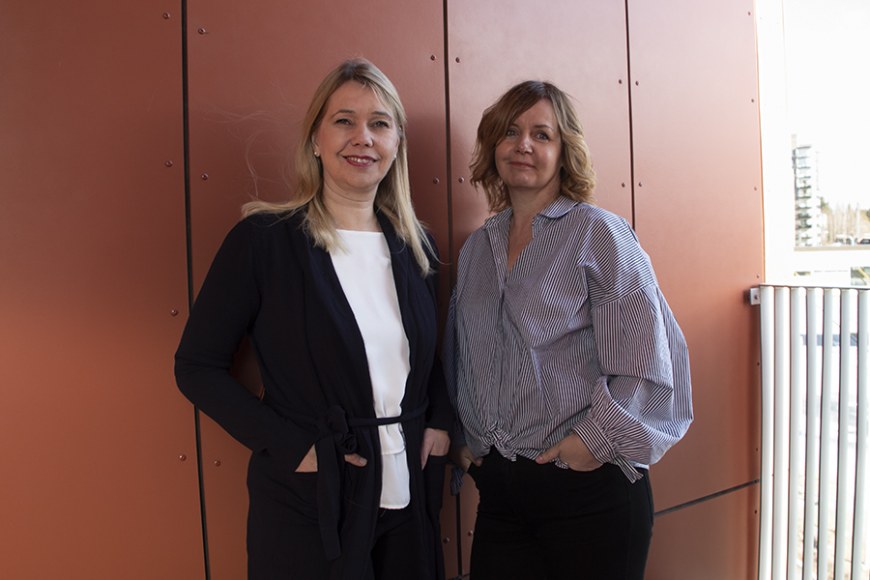