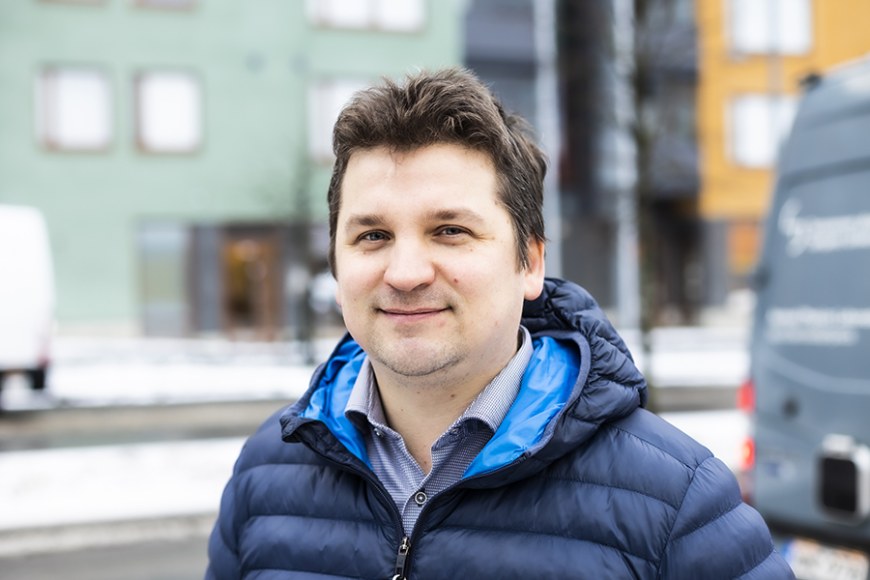 Panu Karjalainen, an awarded aerosol researcher, works at the Tampere Institute for Advanced Study. Photo: Jonne Renvall / Tampere University
The Aerosol Research Fund, which supports and promotes research and education in the aerosol field, has awarded Panu Karjalainen at Tampere University the commendation to a junior researcher of the year. Karjalainen was awarded for his ground-breaking research into particle emissions and measurement methods. The Fund also handed out its commendation to a merited researcher to Professor Tuukka Petäjä at the University of Helsinki.

Panu Karjalainen received the award for his post-doctoral work. Karjalainen’s research studies the aerosol emissions of traffic and engines. He is especially interested in emission components and sources that remain unregulated.

The Fund states in its award citation that Karjalainen has been innovative in his participation in developing new, experimental methods, and publishing, for example, the first time-resolved measurement of the formation potential of secondary aerosols of car emissions. Karjalainen has been successful in his work at the interface between aerosol research and industry and studying the effect of various technological solutions on reducing emissions.

– Finland has world-class knowledge in the field of emission-measuring methods, developing low-emission technologies, and monitoring of air quality, Karjalainen says. It is great to be able to carry out research that may have an impact on both science and society, he mentions.

Doctor of Science (Technology) Karjalainen defended his doctoral thesis at Tampere University of Technology in 2014. Currently, he is working as a Senior Research Fellow in the research collegium Tampere Institute for Advanced Study and at the Aerosol physics laboratory. He has also worked as an Academy of Finland post-doctoral researcher at the University, and as visiting researcher at MAN Truck & Bus AG, the Finnish Meteorological Institute, and the University of Lund.

Tuukka Petäjä, a physics professor at the University of Helsinki, was awarded for his merits in the service of Finnish aerosol research and as one of the developers of the European research infrastructure of his field.  Petäjä is specialising in experimental atmosphere research.

Petäjä has promoted Finnish aerosol research by developing the ACTRIS community and by working to integrate the observation sets of different research infrastructures, especially for reaching an understanding of the processes affecting aerosol particle content in the atmosphere. This has brought visibility, attention, and funding to the Finnish community both nationally, on a European scale, and globally.

The maintenance and development of long-term and commensurate measurements are vital for monitoring such things as climate change and air quality.

– We need reliable and extensive measurements to support science-based decision-making, Petäjä says. Especially the development and integration of observations that demands open collaboration across disciplines, he adds.

He has headed the work in Finland of the ACTRIS research infrastructure – focused on observing fine particles, particle gases, and clouds – and international research collaborations during the past years.  Petäjä is also vice-director at the Institute for Atmospheric and Earth System Research INAR. Further, he is the scientific director of the Pan-Eurasian Experiment (PEEX) and the PI for several research projects funded by the European Union.

The Aerosol Research Fund handed out the 2022 commendations during the ACCC Atmosphere and Climate Competence Center Flagship conference in Tampere on 21 November 2022.

The Fund also awarded the commendation for junior researchers for the first time. The commendation is aimed at younger scientists who have made fast progress, gained merits in the field of aerosol research, education and/or technology, as well as proved to be creative, original, and independent as researchers. The prize is €50.000.

The commendation for merited researchers is aimed at scientists around midway in their careers, with merits in the field of aerosol research, education and/or technology. The prize is €20.000.