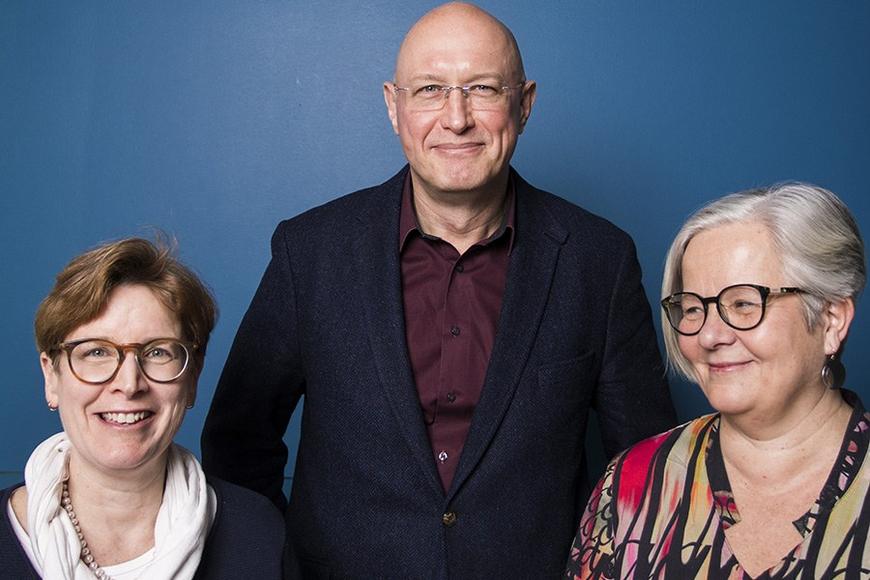 “With machine translation (MT), you can now communicate daily with people you wouldn’t have understood ten years ago without a translator or interpreter,” says translation researcher Mary Nurminen.

Is the biblical story about the Tower of Babel, where God mixed up languages, finally being turned around, as new translation technology is bringing people closer together after thousands of years?

“Not completely, but it is now possible to communicate with people across the globe,” Nurminen says.

“But sometimes you may be misunderstood,” notes Professor Mikhail Mikhailov, Professor of Translation Studies (Finnish and Russian).

The advances in translation technology are due to the introduction of neural MT, which has become the dominant technology since about 2016. For example, Google Translate switched to the technology in 2016.

For several years, the international Conference on Machine Translation has organised competitions in which the translations produced by different MT tools are rated. They are measured against translations done by humans and the results are compared. Over the years, the results achieved by the MT tools have improved greatly.

While results show that the performance of English-to-Finnish machine translation is considerably poorer than human translation, results for other language pairs are better. For example, in the 2019 English-to-German competition, three different MT tools were rated higher than the human translation.

Last September Lecturer of Finnish Sirkku Latomaa studied the latest trends in computer-aided translation and the post-editing of machine translated texts in a summer school in Antwerp. Her experience showed that MT made the translation process considerably faster compared to fully human translation. The translation speed of some participants even doubled.

According to Mikhailov, speed depends on the type of text being translated. In an experiment where students translated similar texts in two different ways – through fully human translation or MT (Google Translate) plus post-editing – Mikhailov reported getting contradictory results. Half of the students preferred working with a machine and post-editing the translations. Others preferred their own translations because they said they had had to rewrite almost everything produced by the machine.

Mikhailov says that the nature of the source text had a crucial impact on the results. Machine translation is not suitable for all texts but, on the other hand, the translator’s attitude toward MT and their experience can influence the result also.

Many ways to produce bad translations

The breakthrough of translation technology easily creates the illusion that all translation problems have already been solved. The researchers point out that machines cannot solve all problems and the need to study translation skills has not been abolished.

“There are many ways to produce bad translations. For example, rather than using a professional translator, you can ask the guy next door to do the translation because he knows a little English,” Nurminen says.

The researchers emphasise that machine translations can be regarded as rough drafts, and a professional is needed to polish them to the level required for publication.

“Machines produce raw translation. It is not always good text grammatically or stylistically, but it can be used in some situations, for example, when it is enough that people get an approximate idea of what the text is about. On the other hand, there are situations where it makes sense to only use human translators because it would be dumb to do anything else,” Nurminen explains.

According to Wikipedia, at the end of 2017, 99% of all translations in the world were done by machines. Professional translators covered just one per cent.

According to Mikhailov, MT tools are very popular. However, all such figures are metaphors because it is nearly impossible to calculate exact numbers. Nobody knows for sure how many translations are done with self-service tools like Google Translate.

Companies want to use their own MT tools for several reasons. Commonly used tools do not always handle specialist terminology very well. Another problem is data security, because companies do not want to make their business secrets available to the public through open software.

Latomaa points out that people may unwittingly air their private matters if they use Google Translate to translate their emails.

Google uses the memory database produced by its Translate programme to improve translation performance. That is where all the love and farewell letters, patient histories and other intimate revelations end up if they have been fed to Google Translate.

On the other hand, diverse text material helps Google Translate to become even better, which benefits all users.

The rapid development of translation technology is creating new demands that people need to be prepared for at universities, schools, and in everyday life.

“Problems may arise if people rely too much on these tools. Things might work well for tourists on the street and restaurants, but if you try to conduct business negotiations with automated interpretating tools, you can run into problems,” Mikhailov advises.

“There are places where raw MT is acceptable and places where it should never be used. We need to train people to understand the difference. I think that in general, people are fairly well informed about the risks and have a healthy suspicion that mistakes can always be made,” Nurminen says.

According to Latomaa, Google Translate has improved its performance in the production of Finnish and morphological problems have been solved quite well.

“It is surprising that Google seems to be able to conjugate verbs and decline nouns correctly, in both singular and plural, yet struggles with semantics. There can be some large mistakes in meaning. This is something we need to think about, and we need to teach our students how to do post-editing with this in mind,” Latomaa explains.

Nurminen says that one of the problems with neural MT is that the text can look fluent but contain factual errors.

According to Latomaa, machine translation tools are a hot topic at schools. It can be a mistake for teachers to categorically ban the tools. Instead, they could teach students to use the new tools and programmes as they should be used – and to be critical about them.

“Language teachers at schools should view machine translation as just one tool, a language tool, that students should be taught to use,” Latomaa points out.

Sirkku Latomaa, Mary Nurminen and Mikhail Mikhailov want to teach university students problem solving skills and ways to manage uncertainty, because translation professionals cannot be educated in a vacuum and then sent off to working life with a complete skill set.

Next year, a digital course on how neural MT works and how it is evaluated will be launched.

Teaching translation technology is demanding because the tools are continuously being updated and developed. Universities can no longer focus on how to use just one programme, which the graduates will then use for the next 20 years.

“It is no use teaching menus and functions. Instead, we should teach the principles behind the tools and how they are used at work. It is quite different than 10 years ago, when we thought that we could educate professionals in a vacuum and then send them out to work,” Mikhailov says.

Latomaa adds that universities should teach students how to tolerate insecurity. Students need to learn to solve problems because they will be grappling with them all the time.

“Students need to master learning skills and to know where to get help when new tools become available,” Nurminen adds.