Models for decreasing energy loss being developed in Tampere 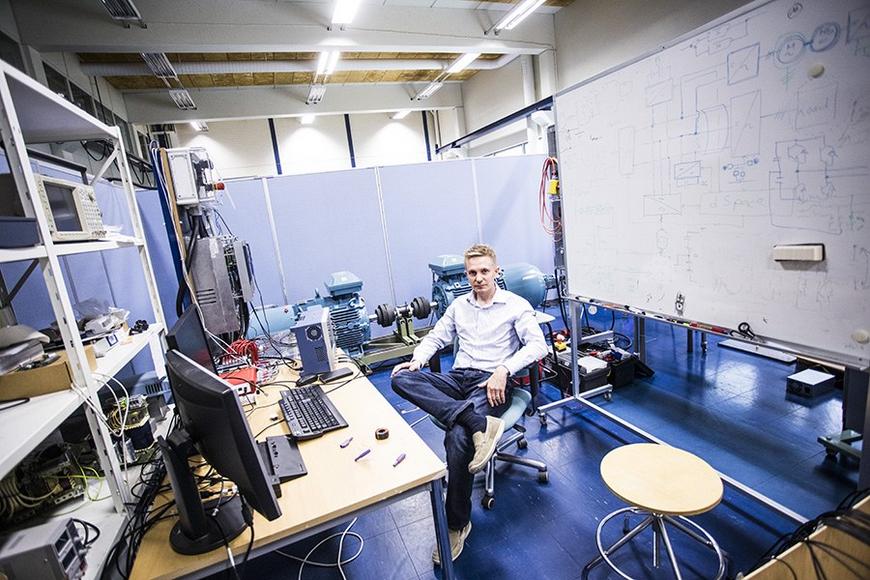 The amount of electricity annually wasted in the European Union corresponds to billions of euros. Finland is estimated to spend at least €90 million a year on wasted energy.

Assistant Professor (tenure track) of Electromechanics Paavo Rasilo has received a €1.5 million grant from the European Research Council (ERC) for a research project that seeks to develop models for understanding electromagnetic power loss mechanisms in power electronic devices. Rasilo is the first researcher at the new Tampere University to receive an ERC grant.

The five-year ERC Starting Grant is meant for top researchers with 2–7 years of postdoctoral research experience. ERC granted a total of €603 million to 408 European researchers from the Horizon 2020 programme.

The grant will allow Rasilo to hire new researchers to his group. Besides himself, the group now comprises four doctoral students and one post-doc.

“The grant demonstrates that our research has attracted interest beyond Finland and is considered important. It motivates us to keep going,” Rasilo says.

Paavo Rasilo received the ERC grant for a research project that seeks to develop modelling tools for improving the energy and material efficiency of high-frequency magnetic components.

Power electronic converters are used to convert electrical energy, for example, from direct current to alternating current and vice versa. Power electronics is needed, for example, to control electric motors. It is also found in many household devices, such as the power supplies and chargers of computers.

A major part of the weight and power losses of power electronic devices is caused by passive magnetic components, such as inductors and transformers.

Rasilo estimates that approximately one third of all electrical power generated passes through power electronic converters. The proportion is expected to rise to 80% in the next 10–15 years.

The increasing use of power electronics is due to the greater proportion of direct current in the future smart grid. The integration of renewable energy sources, such as wind power and solar panels, and data centres into the grid also requires power electronics.

The models developed by Rasilo help to diminish the carbon dioxide emissions caused by electrical energy conversion. The models will also help Finland meet the emission targets set by the European Commission.

Paavo Rasilo says that the significant energy losses are widely known but thus far there have been no methods for reducing them. The electrical engineering field lacks powerful modelling tools for designing devices with lower energy losses.

“We are developing methods that will increase the understanding of power losses in magnetic materials and windings. Once we have a better understanding of these phenomena, engineers will be able to design better equipment,” Rasilo says.

Rasilo says that it is often necessary to find a compromise between power density and efficiency. Power density is the power-to-weight ratio that indicates how many watts of power a device can convert per kilogram.

“Efficiency can be improved by increasing the size of the device but as this reduces power density, a reasonable compromise must be achieved.”

Paavo Rasilo and his group aim to ensure that their methods can be easily incorporated into the design of power electronic applications.

“While making better electrical equipment is the ultimate goal, we will not focus on the devices as such but on creating methods that can be adopted and implemented by companies across the globe,” Rasilo says.

Rasilo refrains from commenting when the first devices designed based on his models are expected to hit the market.

“The project spans five years but the real changes will not happen so quickly. We need to understand that the use of power electronics is continuously increasing, and there are currently no models available for the precise calculation of energy losses. The sooner the methods become available, the sooner they will start generating value.”

Calculating the energy losses that occur in the magnetic components of power electronic applications based on accurate geometric models is difficult, because the required computing power exceeds the capacity of existing computers. They do not have enough processing power.

”If we are looking to understand what happens inside the magnetic components, the computation of the electromagnetic fields must be performed on a computer. For example, as coils may contain hundreds of tiny parallel strands, the required computational models would be huge,” Paavo Rasilo points out.

As Rasilo says, it makes more sense to develop computational methods that can actually facilitate the practical work of engineers.

From Ghent to Tampere

Paavo Rasilo, 36, specialises in electromechanics and holds a tenure track appointment in the Faculty of Information Technology and Communication Sciences at Tampere University.