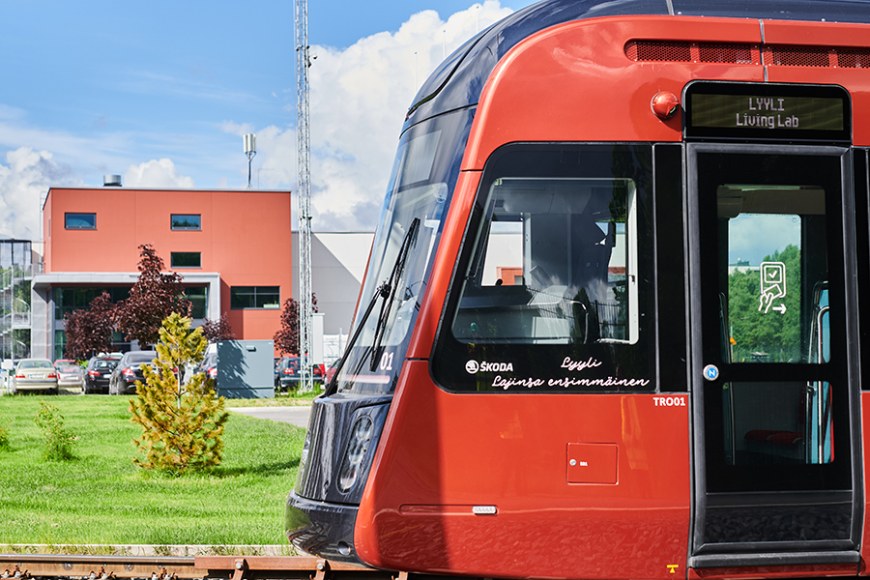 There is a whole new type of tram operating in Tampere: tramcar Lyyli transports passengers as per normal, but it is also used for testing new services, technologies and innovations designed to enhance the travel experience. The test tram is part of the internationally unique Lyyli Living Lab environment which enables the development of smart transport solutions within an actual operational environment. Tampere University’s focus areas in the project are accessibility and a new generation of information displays.

The Lyyli Living Lab project creates conditions for testing different urban transport solutions amidst normal tramway traffic. Besides the Lyyli tram, the project harnesses the whole tramway system of Tampere, and a mock-up tram is also used for experimenting purposes. Additionally, the multi-element research and testing environment lends itself to virtual simulations that, among other things, help to identify solutions that are fit for visually impaired and physically disabled passengers.

– We aim to provide the environment, support and tools needed to make public transport more efficient, more accessible, safer, and easier to use, states Markku Turunen, professor of Interactive Technology at Tampere University.

The Lyyli Living Lab environment is currently being built, but small-scale experiments have already taken place since the beginning of 2022. The first more extensive test began at the end of April.

Lyyli Living Lab is executed as a collaboration of multiple actors, among which is also Tampere University. Turunen explains that the university’s role is to act as a bridge that brings users’ perspective to technological development work. The university’s focus areas also include accessibility and a new generation of information displays.

According to Turunen, next-generation displays could show real-time information on the surrounding environment, to which services could also be connected. When travelling, a passenger could, for example, view information on other transport connections, the cultural history of the area, available services, or highlights of events held at Nokia Arena and in Ratina.

– And this can be done in a visually impressive way. It’s important to remember that travelling is not only about getting from point A to point B efficiently, but it can also be an experience, Turunen points out.

The first example of Lyyli Living Lab’s utilisation has been an environmental monitoring system developed by Škoda Group and GIM Robotics. The system is going to improve traffic safety, and, once in use, it will also reduce life-cycle costs of the tram.

– The testbed has been highly useful for us since it allows us to test initial prototypes in real traffic without a great deal of effort. This makes testing and development significantly faster, states Tommi Tikkanen from FIM Robotics and Kai Hermonen from Škoda Group in a press release about the project.

According to Markku Turunen, the Lyyli Living Lab project is guided by a strong principle of engagement. Urban transport is developed through collaboration, and the plan is to involve a wide array of actors, all the way from companies and research organisations to passengers. A pilot environment is currently being built at Nokia Arena so that people can see what kind of services the tram could provide.

– And once the project is in full swing, Lyyli Living Lab will naturally be a part of everyday life in the city.

The Lyyli Living Lab project will last 4–6 years. Besides Tampere University, it is being executed by Tampere Tramway Ltd, VTT, Škoda, Business Tampere and the City of Tampere. From the city’s perspective the project is well suited for the goal of building a sustainable, smart Tampere region with carbon neutral transport and services that are user-oriented, digital and seamless.

– An attractive city offers its residents high-quality services, a comfortable environment, and smooth everyday life, where moving around is effortless. Lyyli Living Lab accelerates and ascertains the achievement of these goals, says Markku Niemi, director of smart city development at Business Tampere, in the press release.