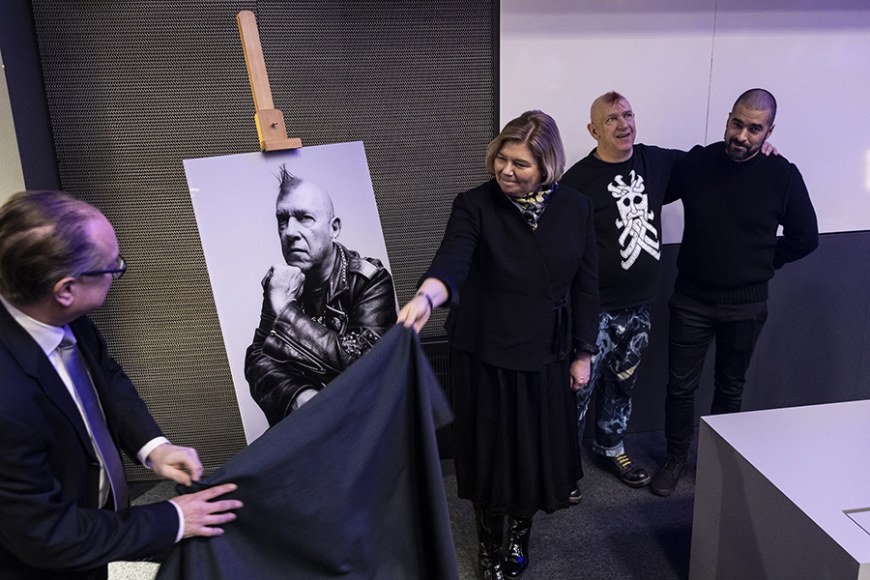 Professor Howy Jacobs’s portrait was unveiled on Thursday. In his farewell lecture, Jacobs talked about the century of mitochondrial research of 1922–2022. Vice President Tapio Visakorpi (left), President Mari Walls, Howy Jacobs and Photographer Rami Hanafi.
Professor of Molecular Biology Howy Jacobs is closing his laboratory and retiring. However, he does not plan to give up science as he will continue writing and looking for interesting projects in other fields, as he puts it, as a scientific tourist. He thinks that generational changes are essential in science.

The EU’s Descartes Prize-winning double Academy Professor and Professor of the Year of the Finnish Union of University Professors has done his life’s work in mitochondria research. Jacobs led the Academy of Finland Centre of Excellence in Research on Mitochondrial Disease and Ageing (FinMIT) from 2002 to 2019. In 2015–2017, he worked as Director of the Institute of Biotechnology at the University of Helsinki.

Until the 2010s, mitochondria, the energy producers of cells, were regarded as disconnected entities in mitochondrial research.

“The field has now shifted to a more integrated concept where all the processes and parts of cells are in an interactive network and mitochondria are regarded as interactive components,” Jacobs says.

“What mitochondria are doing is processing information coming from different directions, issuing information to other components of the cell and modifying their own activity according to the different incoming and outgoing signals,” he adds.

The temperature of mitochondria is the most significant finding

The FinMIT Centre of Excellence studied mitochondria, metabolism and illnesses and, among other things, the role of mitochondrial malfunction in ageing and the development of illnesses.

“From today’s perspective I would say that the most interesting thing I have worked with is what I am currently researching. It is the role of mitochondria in producing heat for the cell and ultimately for the whole organism, how that affects the organism and its environment and how the environment in turn regulates it,” Jacobs explains.

In 2017, Jacobs and his French colleague Pierre Rustin discovered that mitochondria function in a higher temperature, 55 degrees, than the cells around them whose temperature is 37 degrees. He thinks that was the most significant outcome of his research.

“This observation will open the doors for broader questions in understanding thermal biology,” he says.

Jacobs finds the generational change of university teachers and researchers a good thing for the advancement of science. People who have long careers have accumulated much wisdom, but the goals of all fields of science develop.

“I feel it is time for others to pick up the task of educating the next generation of students from their perspective. They may have less wisdom, but they have more acute intelligence, and they also focus on what has been learned more recently. The tendency of us old academics is to sort of stand on the shoulders of the previous generations and look backwards,” Jacobs points out.

“We naturally need the historical perspective, but I think that the perspective of a younger scientist or scholar is really the key to progress in the field in the future,” he adds.

The next researcher generation needs resources

“In a way I would like to conduct research forever. However, I am very conscious of the fact that, given the current social and economic climate, we will have to face a net decline in the amount of resourcing for science, especially for basic science, in the coming decades,” Jacobs says.

He says that by getting research funding he would in practice take the resources of younger scholars.

“I will not be around forever so if there is no other generation of scientists coming after me and others in my age cohort, then science is going to dry up,” Jacobs mentions.

Each generation of researchers will learn from the mistakes they have made, after which they will capitalize on those mistakes and go on to make major contributions.

“From the perspective of balance and progressive knowledge it is better to direct the resources to younger scholars than me at this point. That is one of the reasons for why I am closing my laboratory,” he points out.

Looking for a new place in science

Jacobs has been active in science for 50 years and he plans to continue but in a new way.

“I am going to continue in science, as an observer, a commentator, and a processor of information. I will continue to write blog posts and commentaries on a regular basis,” Jacobs says.

“I see myself as a scientific tourist in the future. I am not going to be fixed down to one project or even one narrow topic area; I will just follow the trails to interesting new places and see what I can discover about them and what that will induce in me,” he says.

Jacobs plans to spend the new year reflecting on what he will do in the future. He may spend the following year in the islands of the Pacific Ocean.