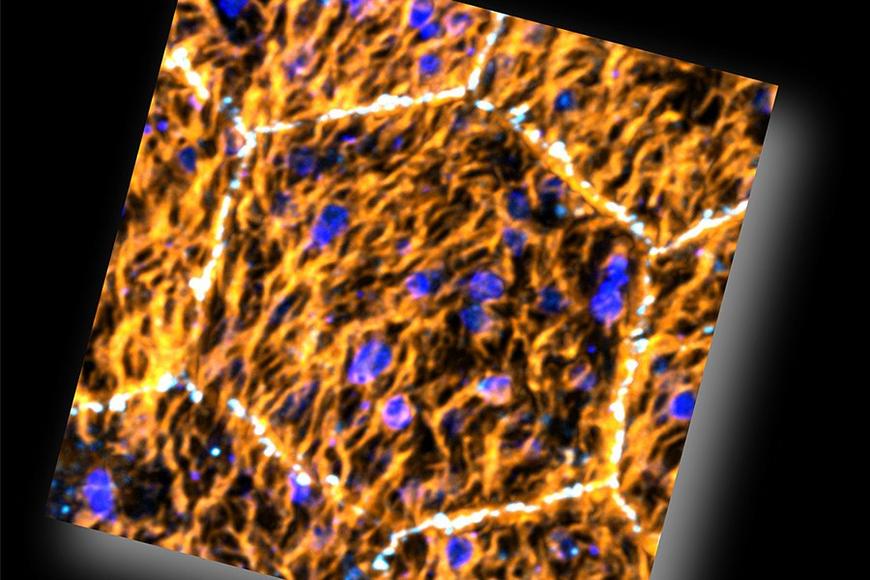 Cells of the retinal pigment epithelium. An epithelial cell is in the middle with microvilli (golden), voltage-gated sodium channels (white), and the photoreceptor cells of the retina (blue) made fluorescent and imaged with a high-resolution confocal microscope. The size of the image is 38 x 38 micrometres (one micrometre is one thousandth of a millimetre).
Finnish researchers have found cellular components in the epithelial tissue of the eye, which have previously been thought to only be present in electrically active tissues, such as those in nerves and the heart. A study at Tampere University found that these components, voltage-gated sodium (Nav) channels, are involved in the renewal of sensory cells in the adjacent neural tissue, the retina. The research results are highly significant considering both the basic research of the eye and incurable retinal diseases because a clear understanding of the mechanisms of many diseases is still lacking.

“The research project focused on the retinal pigment epithelium (RPE), a tissue that is critically important to the functioning of the retina. The project revealed proteins in the RPE whose function is essential for neural tissue, but whose prevalence or activity in epithelial tissue has not been previously reported,” says Academy of Finland Research Fellow Soile Nymark from Tampere University.

“Therefore it is exciting to think of what they could do in the epithelial tissue, which is traditionally considered electrically inactive,” Nymark continues.

In order for our vision to work properly, retinal sensory cells need to be constantly renewed, and this renewal requires the operation of a strictly controlled and multistep phagocytosis process in the RPE. In this process, part of the retinal sensory cell is detached and enclosed within the adjacent epithelium. The epithelial tissue then metabolises these detached parts of the sensory cells in a controlled manner and thus maintains normal functioning of the retina.

The present discovery reveals how the ion channel proteins responsible for the electrical signalling of neurons influence the phagocytosis process. This process is impaired in many retinal degenerative diseases, the most important example being age-related macular degeneration (AMD). The mechanisms and causes of these diseases can now be studied in the light of the new findings, which creates opportunities for the development of curative treatments.

Our present understanding on the functioning of epithelial tissues is strongly based on cell biological studies. In this study at Tampere University, the researchers investigated the epithelial tissue of the eye by utilizing techniques that have traditionally been used to determine the electrical communication of nerve cells.

“This perspective enabled our new observation and highlights that the major role of electrical phenomena and the underlying ion channels in the functioning of epithelial tissue may not yet be fully understood,” Nymark points out.
In the future, the multidisciplinary project will focus in particular on the role of the newly discovered ion channels in the communication between epithelial cells.

The research results were reported in the prestigious British BMC Biology journal.