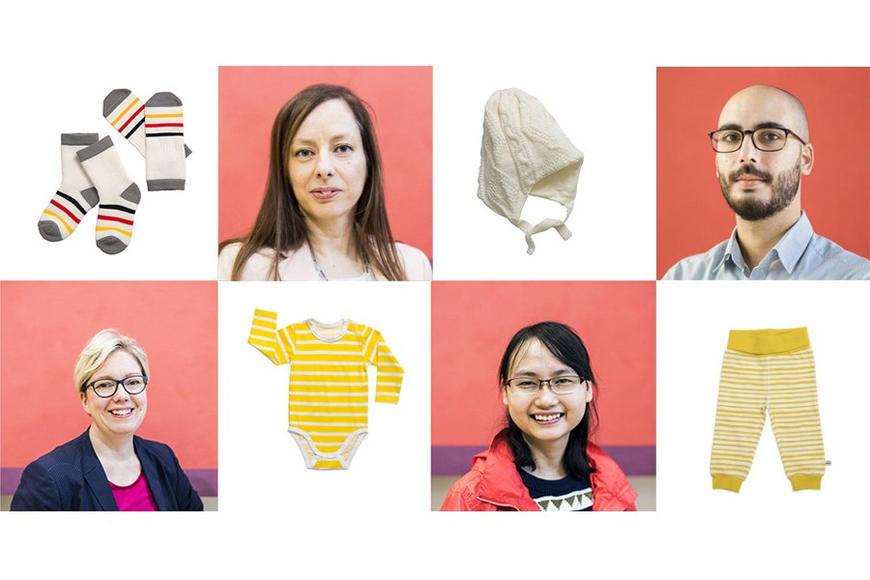 Ella Näsi (left), Annariina Koivu, Yen Phan and Jad Abuhamed have studied how the Finnish social invention known as the baby box has spread to 60 countries. Photographs: Jonne Renvall and Annika Söderblom © Kela
The Finnish maternity package, also known as the baby box, has spread widely around the world. An international research group from Tampere University mapped the phenomenon globally and found a total of 91 maternity package programmes or projects in 60 countries.

The group of global health researchers then interviewed the people responsible for 29 of the baby box initiatives. Their research publication, which was based on the interviews, survey and mapping data, tells about the contents of the baby boxes and the broader welfare goals of these programmes, such as the reduction of infant and maternal mortality. The report also addresses the procurement of the items in the box, the way the boxes are distributed and funded, and other practical matters.

Many maternity package programmes are new, meaning that they have not yet been well established or their continued funding is uncertain. Many of the programmes are maintained by, for example, non-governmental organisations.

In Finland, the baby box has been a universal benefit since 1949, provided the mother attends antenatal care. Today, 95% of Finnish first-time mothers choose the package instead of a cash grant. Globally, baby box programmes are often targeted at vulnerable mothers, such as the low-income mothers in India and refugees in Jordan.

“In Scotland, the national government gives the baby box to all expectant families, as does the government of Chile, where the baby box is given to all mothers who give birth in a public hospital,” says Postdoctoral Research Fellow Annariina Koivu who is in charge of the project.

Baby box in a bucket

The baby box is almost always part of a wider programme aimed at increasing well-being, promoting health or reducing inequality. In many areas, a condition for receiving the baby box is that the mother attends antenatal health care during pregnancy, or that she gives birth in a hospital or health clinic.

“Many people in charge of baby box programmes said that they had launched their project after hearing about the Finnish maternity package,” says Jad Abuhamed, a doctoral researcher.

The baby care essentials in the package are often packed in a box like the one in Finland. In some areas, the items are given in a wooden box, a woven basket, a bag or even a bucket. Local conditions and needs are considered in the design of the contents of the baby boxes. For example, a mosquito net is included in the package in many areas where mosquitoes spread malaria and other diseases.

“The baby box programmes include health communications in the form of online training or a leaflet,” says Ella Näsi, a member of the research group.

In many countries, the box is handed out at events where the parents are given information on pregnancy, childbirth and baby care, and where they also receive peer support.