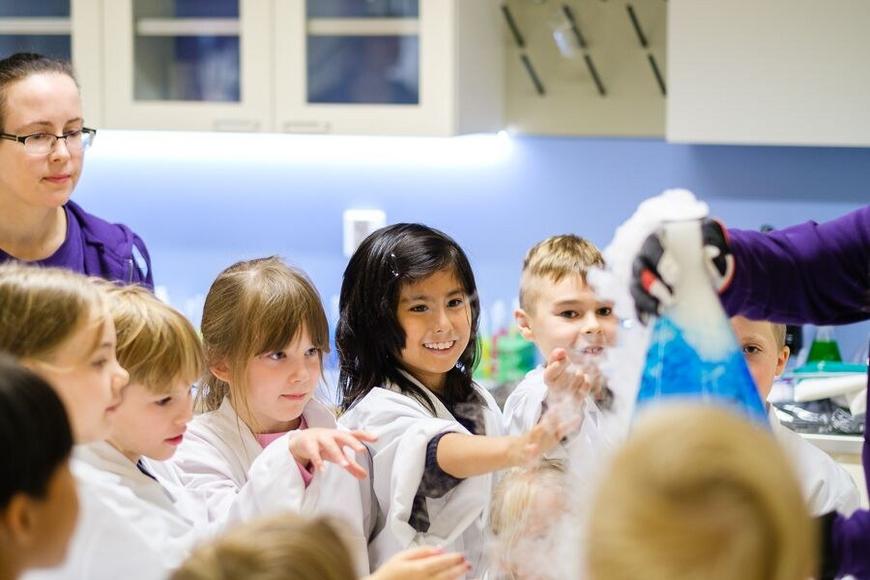 Exciting things at Juniversity: Richard Raja-aho and Outi Kaarela show how frozen carbon dioxide turns into mist.
Pupils from class 2B of Kaukajärvi comprehensive school were the first to use Juniversity’s new science classroom on the Hervanta campus. Wearing white lab coats, 23 children tested how many drops of water a pipette can drop onto a 5 cent coin in a petri dish before the water begins to drain off. In this way, the children learned about the surface tension of water and the use of a pipette in a laboratory workshop.

Juniversity is an umbrella for science clubs, camps and events, children’s visits to the University, and the lectures offered by the children’s academy. The courses and workshops enable learning about, for example, natural science phenomena by hands-on experimenting.

The use of a pipette is needed in the next task of the laboratory workshop where the children make a rainbow from colourful glucose solutions.

“Here one can learn to make observations about chemical phenomena,” says Tarja Auvinen, class teacher of 2B.

Juniversity brings together and strengthens science education at Tampere University.

“We want to offer children and young people an opportunity to experience, learn and be inspired by different fields of science in various ways,” says Marja Sutela, Vice President of Tampere University.

“We also want to promote educational equality by giving children and young people the opportunity to participate in Juniversity, either individually or through school,” Sutela adds.

Next door to the science classroom, pupils from the Hatanpää High School Preparatory Course are getting ready for a workshop on wind power, programming and electronics. The aim is to build a small windmill simulator.

“All our pupils aim for high school and after that higher education. Many are interested in technology,” Anne Hietikko describes her pupils whose mother tongue is not Finnish.

“It is important that girls are also inspired by technical fields,” says Hietikko.

Juniversity's tutors are mainly teacher training students from Tampere University. Eeva Mäenpää and Ida Yli-Kesäniemi, who tutored the pupils in the windmill simulation, are studying to become mathematics, physics and chemistry teachers. They have previously led science clubs.

“I am interested in natural sciences and would like to spread the interest further,” Ida Yli-Kesäniemi says.

“I would like the pupils to learn to ask questions, marvel at scientific phenomena and experience feelings of success in the workshops,” Yli-Kesäniemi continues.

Reflectors were made in Fablab

On the opening day of Juniversity, feelings of success were also experienced in Fablab next door to the science classroom. Fablab is an open learning environment and a digital manufacturing workshop on the Hervanta campus. In the Fablab workshop, for example, a group of 7th-9th graders from the South Hervanta School used a laser cutter to make everyone a reflector key ring.

The pupils also experimented with 3D printing. Furthermore, other equipment in the Fablab piqued the pupils’ curiosity and they experimented with, for example, a sand box that illustrates augmented reality.

“About a thousand pupils come to Fablab annually, says Project  Manager Jussi Viljanen. On open days,  Fablab is also open to children without a school class, but they must come with a parent.

In the workshop in the science classroom, work has progressed to the final task guided by Outi Kaarela and Richard Raja-aho. Raja-aho drops frozen carbon dioxide into a large laboratory bottle filled with blue water. The ice begins to turn into gas, and a white mist begins to rise from the bottle. Children are watching closely.

“The fun part is that the children are so excited,” says Kaarela, a doctoral student.

“It's fun to encourage kids to explore and to fuel their curiosity,” says Raja-aho.

“Some of the teachers said that they will bring their pupils to Juniversity every week. It is important for the pupils to sometimes go to a different learning environment and at Juniversity they may experiment with things they cannot do at their own school,” Petäjistö continues.

Juniversity is open to schools and colleges as well as individual young people. Most activities are free of charge.

Juniversity’s Children’s Science Day was part of the opening week of the Tampere Universities community.