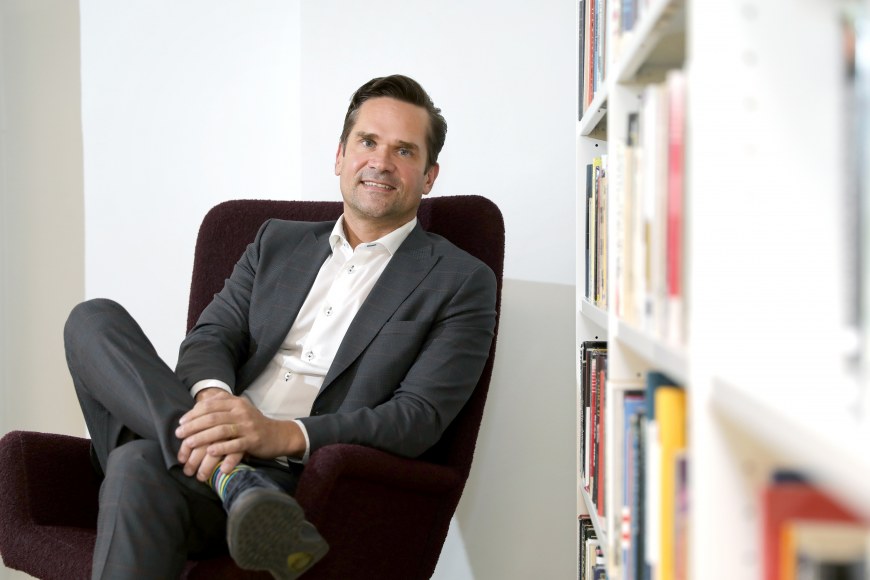 In his current position as Director of the Finnish Institute of International Relations (FIIA), Mika Aaltola, an alumnus of the Tampere Universities community, supports decision-making and public debate on foreign policy. He considers having a broad vision, a diverse interest in world affairs and keeping a sufficient distance as the most important aspects of his job. Studying international relations at the University of Tampere created an important basis for his current demanding work, which requires a reflective and analytical eye.

The job description of FIIA’s Director Mika Aaltola is an awe-inspiring read. Among other things, his job includes leading a work community of 60 people and taking care of their employment relationship issues, discussing research topics and perspectives with FIIA’s researchers, maintaining a publication and events calendar, mapping out funding opportunities, and a continuous dialogue with significant stakeholder groups. At the same time, he also works as a part-time professor at Tallinn University is a docent of Tampere University.

The main role of FIIA, which is supporting public debate and decision-making, is also quite broad. The research organisation is a sort of a ‘mirror for princes’ as it offers decision-makers critical and analytical perspectives.

“In my job, both the biggest challenges and the tastiest spice are motivated by the same thing. I have always been interested in forming a full picture and an overall view on how things are interrelated. One of the most interesting things is, for example, the political implications of the COVID-19 pandemic around the world. The U.S. presidential election would have looked quite different without the pandemic and the situation will inevitably affect events in Russia and Belarus. Understanding such chains of events and interrelationships is challenging but at the same time extremely interesting and necessary,” Aaltola says.

According to Aaltola, the world has become increasingly difficult to understand. Clear paradigms have given way to more complicated situations, which is why both decision-makers and citizens need people who are able to see the big picture and make it more understandable. Aaltola fulfils this role by, among other things, giving lectures and participating regularly in various discussion events organised by stakeholder organisations and national media. This is where responsibility enters the picture because the interpretations he voices can have far-reaching consequences.

Part of the challenge also arises from the fact that research on international relations deals with current developments. Unlike Cold War scholars, Aaltola and his colleagues at FIIA are unable to see the full picture of events or the entirety of consequences yet. All they can do is gather as much information as possible and base their interpretations on that.

“The most important thing in this work is a genuine interest in interdependencies and international relations. Maintaining a sufficient distance from the things we study and looking at them from a bird’s eye view is also essential. We at FIIA are not part of the events or processes but look at them from the outside as longer trajectories,” Aaltola explains.

From backwoods to a metropolis

Aaltola is originally from the small village of Kintaus in Central Finland and he has travelled a winding path to become the Director of FIIA. He developed an interest in international issues at a young age and left immediately upon graduation from upper secondary school to study psychology at Columbia University in New York. He says he literally left the backwoods for a metropolis.

After earning his Bachelor’s degree, Aaltola returned to Finland and begun studying at the old University of Tampere (UTA) at the beginning of the 1990s. That was the time when UTA rolled out its first English-language Master’s degree programmes and Aaltola was admitted to study international relations with Japanese Studies as his major. His capacity for in-depth analysis and research could already be seen at that time; his Master’s thesis in political science was the best of the class in 1995.

“I remember how eye-opening studying at that time was and I still feel privileged for having been able to study in that programme. At the time, international relations were looked at from an exceptionally wide perspective and even a little philosophically. In many other universities the perspective was rather more practical and even professional. At UTA, Professor Osmo Apunen had a reflective, social scientific and even meta theoretical approach. This helped to form a full picture of the world and those studies have carried me to where I am now,” Aaltola says.

In 1996 and after earning his master’s degree, Aaltola continued at UTA in the Doctoral School of Social Sciences and wrote his dissertation partly at the University of Cambridge. In 1999, 30-year-old Aaltola defended his dissertation that dealt with the effects of the mad cow’s disease on international relations. His doctoral dissertation was also awarded as the best of the year.

He also found his first academic job at the University of Tampere where he worked as a senior research associate. His path has also taken him, for example, to a professorship in Minnesota and various research jobs. In 2011, Aaltola started working as Programme Director at FIIA where he has worked as Director since 2019.

Aaltola’s career advancement has been impressive and internationally significant. For those interested in similar tasks, Aaltola recommends, above all, acquiring and nurturing wide horizons.

“Build your own thinking by looking for a variety of perspectives during studies especially from minor subjects. For example, my training in psychology has been very useful along the way. You should be interested in everything from music to anthropology to philosophy. The new perspectives give a nice extra boost to one’s thinking,” Aaltola points out.