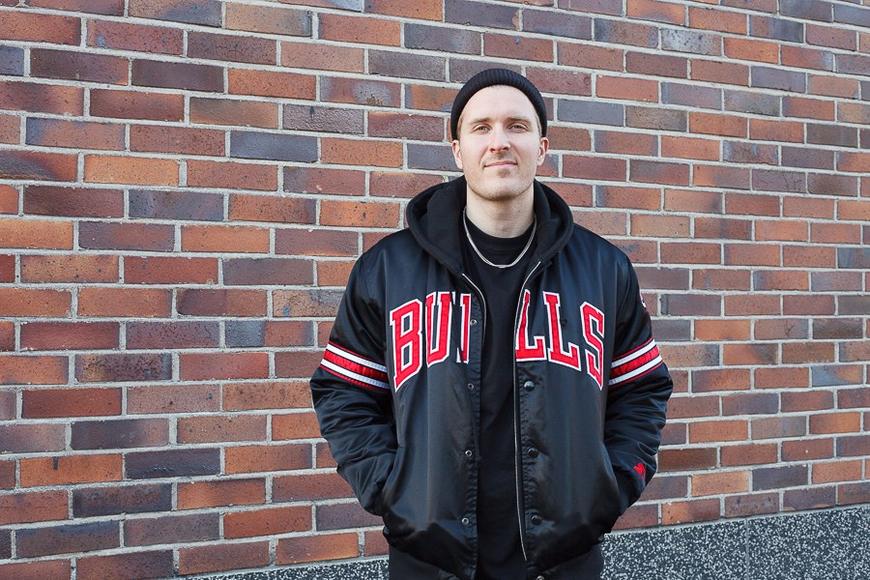 Juuso Kallio thinks that laugh is the best reaction the human body can produce. Kallio’s work includes making people laugh for 42 hours non-stop for the benefit of children worldwide. Many know him as Köpi from the radio channel YleX.

Kallio, who comes from the town of Pori, graduated as a Bachelor of Culture and Arts from Tampere University of Applied Sciences in 2015. He studied digital sound and commercial music in the Degree Programme in Media in the town of Virrat. The same contents can nowadays be studied at TAMK Mediapolis in Tampere.

Drama rather than blood

Even if Kallio first felt doubtful about the remote location of Virrat, his friends’ and field-specific professionals’ recommendations made him convinced of it being “a tough programme”. The high level of the programme also became apparent in the entrance examinations as the doors did not open to him the first time. The degree programme was Kallio’s second choice then but he would have needed the points given to the first choice in order to be admitted.

When thinking about his future career, Juuso Kallio had emergency care or fire fighting in mind and he almost ended up in the Emergency Services Academy.

"Then I noticed that I rather watched drama scenes in Grey’s Anatomy and other series than the ones with blood. I realised that maybe it is not the right work for me."

Music has been present in Kallio’s life since he was a teen and his father encouraged him to apply for music-related culture and arts studies.

The close-knit atmosphere of the small town created an exceptionally strong team spirit among the student group and teachers. Kallio still has close occupational and personal contacts with many of his peer students. Spontaneity of the teaching made him feel like spending time with a group of friends. At times we went to student parties in Tampere and also completed some studies there.

It is typical of the degree programme that careers are already started during the study time. Peer students supported one another and the school equipment and settings were perfect for making work samples.

When Kallio started his studies at TAMK, he was most interested in mixing and improving the quality of his productions. Soon he became more interested in record company operation and business, which are also taught in the programme. After his first study year, Kallio however ended up as a radio host in his home town Pori and radio work became a part of his everyday life.

Combination of studying in Virrat and working fulltime in Pori succeeded flexibly at TAMK. For example, Kallio’s radio work was approved as practical training. At times he worked for a week and then studied for a longer time. Sometimes he studied for a day and worked for a couple of days.

I learnt to know the Pori–Tampere–Virrat–Pori triangle when driving it. When I graduated, I realised that I became a radio journalist.

Even if Kallio did not directly study radio work, the studies have been highly useful on his radio career. Studio work was familiar to him and he did not have to feel nervous of it. Kallio understands signal chains and sound waves and can solve surprising technical problems and create soundscapes.

Graduation from TAMK and being a TAMK alumnus are an honour to Kallio.

"It is important to be a part of a community and for me TAMK is that. I believe that human beings are psychosomatic wholes. Everyone knows if graduation is significant for them. Incompleteness may bother and graduation may help to achieve their internal zen. A profession creates support, security and trust in the future."

With hard work to everybody’s ears

In the interview morning, Kallio was awoken by the alarm clock at 5.30 and headed for the morning broadcast of the national YleX radio channel at 6.30. He hosted the broadcast with his long-term colleague Ville ”Viki” Eerikkilä.

After his graduation in 2015, his hard work paid off when Kallio was hired by YleX.

"At that point, I had graduated and I could say that I had made hundreds of live broadcasts."

When this article was written, Köpi and Viki had just hosted a live radio broadcast called YleX Laugh Marathon for record-breaking 42 hours non-stop. The previous Laugh Marathon won the Golden Venla Award for the best programme in 2020. The psychologically and physically demanding broadcast raises funds for children around the world. This year the sum was well over €300,000.

The expectation of being funny is however present at work. Highlights are collected of all morning broadcasts.

Do you feel pressure to be funny all the time? What if it does not work out?

"I sometimes felt the pressure. Luckily there is a thing called maturation. I just turned thirty. I do not want the work to determine who I am. It is a fact that nobody can be funny all the time. Would anything be funny if everything was funny all the time?"

Genuineness is important. Every year I am more genuine. Every year people either love or hate me more. I think radio work is mainly improvisation. It also liberates – if we were not funny, we will have a new chance in three and a half minutes. A bit like a bad player change in ice hockey. The next one may be a lot better.

Many faces of the media person

Kallio was chosen as the media person of the year at the Industry Awards gala in 2019. In addition to radio journalism, he has participated in TV productions, performed in media events and done sketches.

"I do not know what it feels like to a be a media person. Probably a bit distressing for such a sarcastic and cynical person as me."

In Kallio’s opinion, the award was great as the choice was made by colleagues and professionals of the field. It is great to have recognition from them.

Nevertheless, the media person is only a part of the picture. How is it possible to separate between work and personal life?

"​​​Radio has always been therapy for me at other people’s expense. It is great that people have let me be who I am even if it is said that the world is a bleak place. Because of it, I like telling stories of my life for three and a half hours every day. When I leave the studio, I do something else on my leisure time."

Kallio has faced people’s many assumptions and prejudices about what he is like. He still trusts that majority of people understand that the media person is not the same as he himself. Kallio is quits with his radio personality.

Kallio feels that he more represents himself and ordinary people at work than a radio channel or his employer.

On the grass root level of programme production, you cannot talk to people from the heights but you have to be a human being yourself.

Making people laugh has always given pleasure to Kallio. It still motivates his work. He receives plenty of feedback and he thinks it is the best part of his work. People tell him that they were depressed but found content into their life by listening to the morning broadcast.

"​​​We did not solve their problems or make them happy but the three and a half hours we offered in the morning made them think about something else."

During the corona time, the radio has given people something else to think as many work remotely. We have not offered corona information in the morning broadcasts.

Media persons however influence in good and bad. Kallio can raise topics for discussion and at Yleisradio he has broad freedom of speech. He can for example safely crack a political joke about any party.

"​​​​​In principle I would like to offer people time off from everything. I am not highly interested in political matters but I would like to make a podcast on people’s everyday lapses. We all have faults, double standards and such."

According to Kallio, school bullying is a good example of this. The same persons who share social media posts on preventing bullying may run down Isaac Elliot when his song is played on the radio. Kallio would like to ask people in such situations if they understand that they make themselves guilty of bullying.

Kallio has good tips for those dreaming of becoming a radio journalist.

"Do much yourself. Nowadays many can start projects, videos and podcasts during the studies. When it is time to set off, you have a catalogue, CV and many self-learnt skills. You learn well by making by yourself and by screwing up."

Kallio encourages to swallow your ego and give up the thought that you should reach the top right after school. On his career, the work in the local radio was his best lesson on practical work.

"If you hit a brick wall, look out of the window. If there is no door, there is a window somewhere."

Because Kallio has a rap background and makes songs sometimes, I gave him a challenge at the end of the interview: do a TAMK rap!

"We have to see how it goes. It is not a very hot topic but a challenge. I have run naked in a live broadcast and so I do not think it is an impossible task."

We will see what happens.