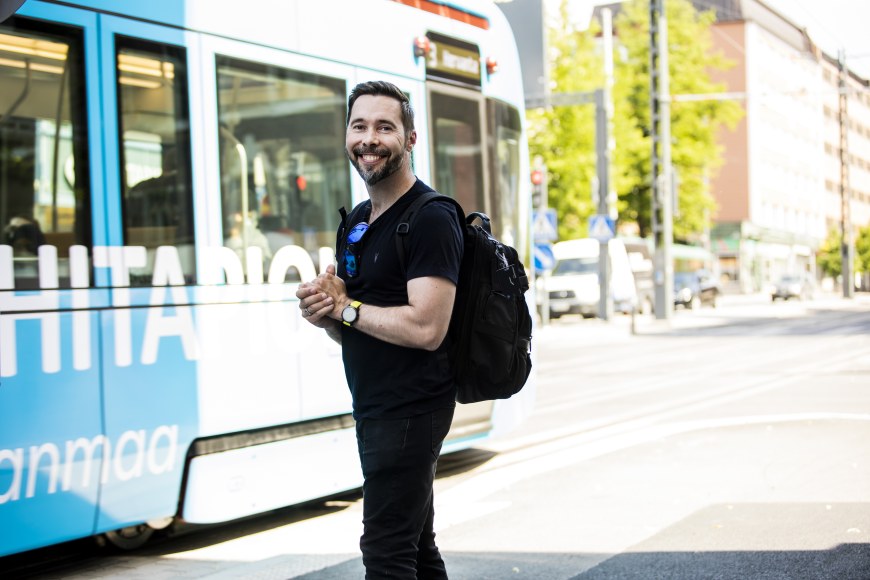 Doctor of Technology Juha Alakarhu works currently as VP of Imaging for the global technology company Axon. He is a technology enthusiast originally from Lapua, Finland, who has been taken far by his studies and career. Juha graduated as a Master of Science in Engineering and later a Doctor of Computer Technology at Tampere University of Technology. His career has revolved heavily around cutting-edge expertise in camera technology and the continuous development of the field in the Tampere region. Initially, his career path opened through a sort of a backdoor.

Juha Alakarhu’s job description at the global technology company Axon is quite broad and it involves both hardware and software. The company’s main products include tasers as well as body- and car-mounted cameras for law enforcement purposes.

Juha leads a 13-person team that brainstorms and develops prototypes and designs products for mass production. He describes his duties as genuine engineering work, which also largely matches the expectations he had during his studies – or actually it has turned out to be a lot more fun.

“I’ve been interested in technology from a young age, but I had trouble deciding whether to focus on the hardware or software side of things when applying to university. Luckily, I got the opportunity to study both areas, and my current work also combines both,” Juha says.

A positive cycle of expertise and learning

In Juha Alakarhu’s view, the strong expertise in camera technology in the Tampere region stems from a positive cycle of existing competence and learning new. The region boasts an active ecosystem of camera technology development, within which specialists work together to explore new things and share knowledge. The camera-related expertise in Tampere is unparalleled even on a global scale, and the university plays an important role by training new experts.

“There are few centres of excellence of this kind in the world. Equal expertise with such a strong focus on cameras is not available anywhere else, which is why many companies have set up development units for camera products specifically in Tampere, Finland,” Juha explains.

Juha’s own work history comprises a variety of phases working with different employers, but the common thread has always been camera technology and solutions built around it. Having served as a researcher and completed his doctoral thesis, Juha worked at Nokia for nearly a decade in positions such as a specialist and design engineer. Later he gained larger roles which involved him leading Nokia’s camera development efforts. Juha and his camera team developed solutions that represented the absolute pinnacle of the field.

When Nokia was replaced by Microsoft in Tampere in the mid-2010s, Juha was responsible for the imaging technology in phones at Microsoft. His work involved developing camera equipment, software, algorithms and user interfaces as well as testing a variety of new ideas related to cameras. In 2015, he was located in the United States.

Before moving to Axon in 2018, Juha also worked on the famous OZO VR camera at Nokia Technologies, heading imaging. These duties, too, combined hardware and software development.

“I’ve had the opportunity to observe my field from a variety of perspectives. When I started at Nokia back in 2004, I was immediately at the heart of global camera development. We made mass products for consumer use, and the sales volumes at the time were staggering. Later in the OZO team, we developed a €60,000 specialty product for an entirely different market,” Juha says.

Juha also wants to emphasise collaboration and the friendships he made along the way.

“Our camera team has always had an excellent team spirit – like a group of friends on a playground. Even though camera development is super interesting on its own, the best things about the work have actually always been the amazing people and the friendships,” Juha notes.

Larger responsibilities have stacked up gradually along the way, and Juha says he has also been very willing to take them on. Still, even the longest journeys begin with the first steps. Juha gained his first job at Nokia after seeing a job listing that mentioned the word ‘camera’. He had not completed any studies related to cameras at the university, but he was interested in them as a hobby. Juha submitted an application and went to an interview, but was not chosen for the position. Some time later, however, he was contacted by Nokia and offered another position specifically in the group responsible for camera development. In his words, he slipped into the camera team through a backdoor.

“Securing the first job is always the hardest since you have no prior experience. In my opinion, a solid goal is to get really good at something specific while seeking to form a broader understanding of the big picture. Being exceptionally good at something requires genuine interest, which often means that you have related hobbies and personal projects. Moreover, it always pays to place yourself in situations that enable fortunate coincidences – after all, they rarely occur if you sit alone in your room waiting,” Juha says.

Never start off by saying ‘no’

When Juha was considering his study options after upper secondary school, he eventually made his decision largely based on gut feeling. Technology was near and dear to him, and the thought of studying at Tampere University of Technology seemed fun. Many of his friends had also applied to the university, and Tampere was at a reasonable distance from his home town, Lapua. Juha applied to study electrical engineering and was accepted.

“At the time, I was very much into coding projects and electronics. I studied both software and hardware at the university,” Juha says.

Juha describes his years as a student as extremely fun. He lived in a shared flat, which is an experience he warmly recommends to all students. Juha met one of his current best friends while living in the flat, and they still keep in contact several times a week.

“I was a fairly ambitious student, I studied very diligently. Learning new things was really amazing. The exercises were suitably challenging, and everyone had the opportunity to employ their own creative methods. Alongside my studies, I also had time to get acquainted with some great people and do my fair share of partying,” Juha says with a smile.

Juha’s combination of a laid-back attitude and ambition has stayed with him through the years. In his experience, momentous things can happen quite coincidentally when you keep an open mind.

“In my experience, good opportunities present themselves as long as you let them. This is how many major innovations have also been made: through hard work and well-timed coincidence. This is why I think it is never wise to start off saying ‘no’ – even if the idea sounds completely absurd at first. Say ‘yes’ instead, and then put some more thought into it.”

Quote: “Finnish engineering work is skilful, pragmatic and forward-looking. In addition to these aspects, I think we have more room for positive silliness and big personalities.”