Our alumnus Jouni Ovaska: Positions as Member of Parliament and schoolteacher blend naturally 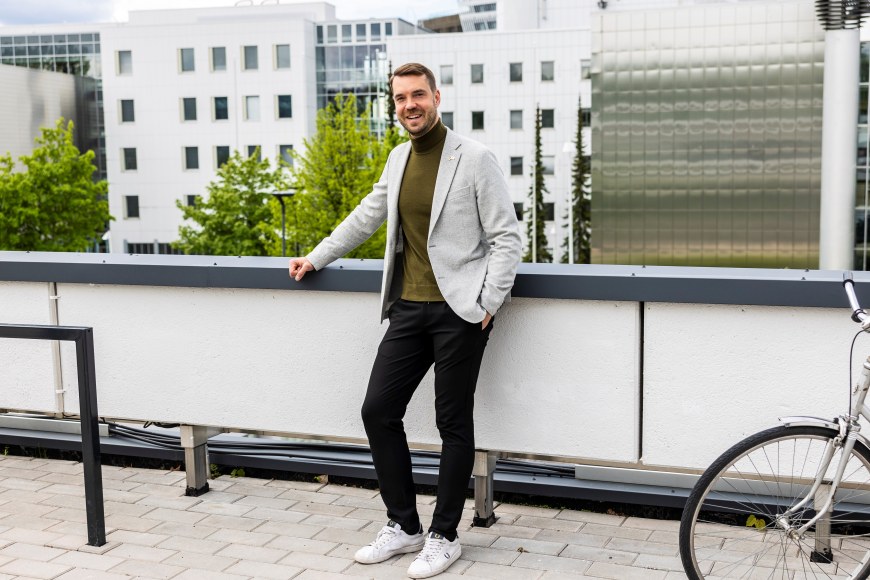 Master of Education Jouni Ovaska is not only a schoolteacher but also a first-term Member of Parliament. During his studies, Jouni recognised his growing interest in politics, which later led him to alternate between these two worlds. In his parliamentary work, he finds it rewarding to promote both broad agendas and more specific improvements that have a practical impact on people’s day-to-day lives.

Jouni Ovaska describes his career path from a schoolteacher to a Member of Parliament as a conscious and determined process, which has also benefitted from opportune timing. During his studies in education, he noticed an increasing interest in politics, which is why he later also decided to study political science at the university.

The road to the Parliament opened up gradually, first through involvement in student politics, the Student Union and the Council of Representatives, followed by municipal politics and then national politics.

“The statistical percentage of education graduates in the Parliament is actually quite high. Maybe we represent the right personality type or a certain kind of character. Speaking and problem solving come naturally for us. Both jobs also require the ability to compromise,” Jouni says.

Bettering the world without forgetting the individual

Jouni Ovaska is currently engaged with wide-ranging political issues. As a member of the Foreign Affairs Committee, he is tasked with considering questions such as Finland’s NATO application and the situation with Turkey. He is also a member of two other committees and Vice Chair of the Centre Party Parliamentary Group. All of these roles pile plenty of extra work on top of the duties of a regular MP.

“There’s certainly a lot to do, which means that time management is an absolute necessity. Sometimes it can be challenging, but you need to lighten your load through a process of elimination and try not to study and read about everything. I guess teachers are typically quite detail-oriented and like to get involved in everything – still, you can’t say ‘yes’ to everything. Fortunately, the past three years as an MP have helped me find some clarity, routines and ways of working more systematically,” Jouni says.

“One of the most appealing things about my job is that I also get to influence very specific issues, such as road projects, bus lines and sports arenas,” Jouni describes.

Jouni’s career in politics originally started on the municipal level with questions related to education, and he still strives to leverage his position to bring attention to primary schooling, for example. He finds that matters related to education are often left by the wayside in favour of other affairs.

“Primary schooling is a topic that should always stay at the top of our priority list,” Jouni says.

Jouni has warm memories of his years as a student. In particular, he thinks back fondly to the communality in which the teachers-in-training were taught. The study group functioned almost like a school class and was very practically oriented, which provided plenty to draw from for Jouni’s later years as a teacher.

“We did a lot of things together. I enjoyed the heavy focus of contact teaching, which brought us closer and allowed our different personalities to really show. To effectively counterbalance the lectures on the history of education, for example, we sometimes just let loose and sang and played together,” Jouni recalls with a smile.

His current job as an MP, in turn, requires the ability to analyse and interpret, retrieve information from various sources, and possessing a certain kind of tenacity and strength of character. It is important to keep in mind what ultimately forms the core of the work, and to sometimes consciously remind yourself of your goals.”

“You have to be able to keep your thoughts together despite the constant bombardment of influence attempts. At the same time, I put a lot of weight on the ability to listen.”

This is precisely what Jouni does at Tammelantori Square, for example, where people walk up to him and share their views and concerns. If these conversations reveal something specific that requires further investigation, Jouni is more than happy to set the wheels in motion and assign his assistants to look into the matter.

“Tampere is my home, and the local university is a genuine source of pride for me. It is great to be able to say that I have graduated from the university of my home city. I’ve always thought that Tampere is the best city in the world!”

Success: “I experienced one of my strongest feelings of success when we gained funding for the repair of National Road 3. The government granted €60 million in funding for the project. The decision was particularly rewarding since we had pushed and worked for it for almost half a century!”

Tips for current students: “Make the most of your study time. Use your academic freedom, go abroad for an exchange, take roads less travelled, and seize the wide opportunities available in your university. Having said that, remember to also be reasonable to yourself. This is an important message in our time and age.”