Our alumna Laura Ruohola: Higher education provides an understanding of life and the world 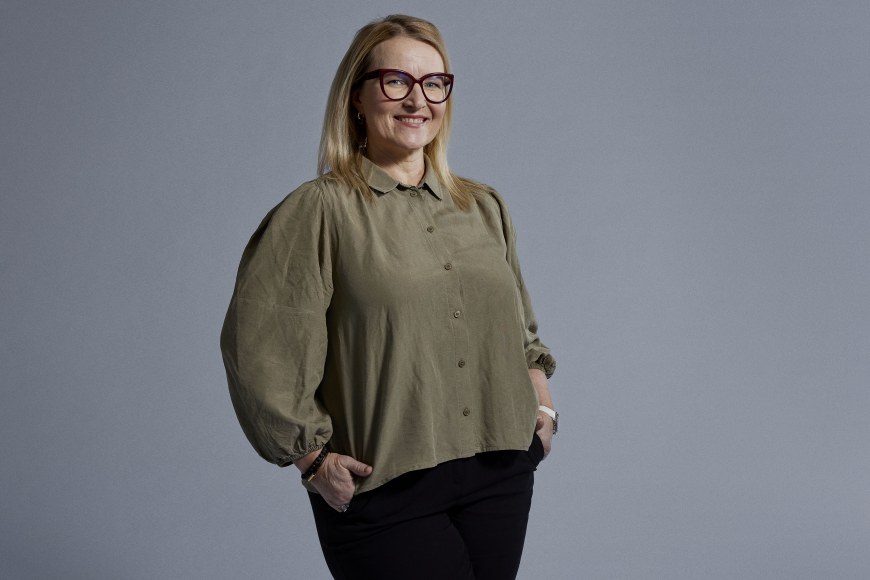 Laura Ruohola, Communications Director for the Centre Party of Finland, became a public figure in her role as a long-time sports reporter for the Finnish Broadcasting Company YLE. Between these two positions, she worked as a freelance journalist, television presenter and project manager for a holiday housing fair, among other duties. Ruohola’s educational background is in administrative sciences. Having studied regional science and environmental politics at the University of Tampere, Ruohola finds that the education provided her with a solid foundation for many kinds of endeavours. Laura will now also be visibly featured in Tampere University’s alumni relations materials as one of the new faces.

When Laura Ruohola started studying Regional Science at the University of Tampere back in 1993, she had already worked a number of years as a journalist for the Länsi-Suomi newspaper in Rauma and for Radio Ramona, which both belonged to the same group. Even though she surely had the road paved for a career, Laura had a burning desire to study at the university and gain a master’s degree. The most obvious choice would have been to study communications, but Laura decided otherwise.

“I browsed the study guide and was drawn to Regional Science. I have always found the regional variety in Finland to be one of our most significant riches. I would like to see all areas of our country remain vital and populated,” Ruohola says.

After a long career as a reporter and presenter, Laura in a way returned to her roots in 2018 by becoming the Communications Director for the Centre Party of Finland.

The practical work of a communications director is varied and involves many important interest groups. Laura’s closest colleagues include the members of her communications team and the party secretary. Since she began to work for the Centre Party in spring 2018, the ride has been rather wild.

“In many ways, the period I have worked for the party has been quite extraordinary. First of all, we have been a government party for the whole time, which has naturally shaped our activities on a general and party-specific level. A year working alongside the Prime Minister’s Office was of course quite special as such – after all, the Prime Minister is a strong institution in our country. These years have also been challenging in many respects, so we have been pulled in many directions,” Laura says.

Laura describes her approach to work as a combination of action-packed multitasking, a happy-go-lucky attitude and yet uncompromising conscientiousness and precision. The hectic day-to-day work is demanding in many ways.

“A key skill in this work is to be able to tell apart what’s relevant and what’s not. The world of politics keeps turning 24/7, or actually 26/7. You need to focus your efforts on the right things,” Laura says.

The Centre Party is known for promoting regional politics and working for environmentally conscious living and development in all parts of Finland. The very same themes are also important to Laura and, partially by coincidence, her university studies are directly linked to them. In addition to majoring in regional science, Laura studied environmental politics as a minor subject, and she has always felt strongly about themes such as climate change.

To be able to work at such a hectic pace, Laura says she needs to have a genuine drive. The previous phases of her career have therefore also concerned themes that are close to her heart. As a sports reporter for YLE, Laura felt she was engaged in meaningful work that offered a wealth of opportunities and enjoyable tasks. The work was much more than a way to earn a living.

“I felt extremely privileged working as a sports reporter for YLE, I enjoyed every moment of it. One of the many wonderful memories I have from those years is the Sydney Olympics in 2000. That year, the event was perhaps the most spectacular Olympic Games in history, and I also had the opportunity to get acquainted with the local life in Australia. It was an unforgettable work trip that left me with a permanent longing for the country,” Laura says.

Another highpoint in Laura’s career was the Kalajoki Holiday Housing Fair in 2014, for which she worked as a project manager from 2012 onwards. The aim was to increase awareness of Kalajoki and the local sand dunes, and to organise a successful fair event.

“For those two years, the housing fair project was my life. I still see it as an amazing success and feel happy about the work effort I was able to provide to Kalajoki.

Driving to Tampere in the wee hours

Laura Ruohola’s approach to studying is quite straightforward and practical. Over the years, her colleagues in various work communities have come to know her as something of an evangelist for education, someone who encourages everyone to complete their degrees.

“I began working at a young age, so I was always the youngest member in every team. Later on, I have been part of work communities with a lot of young people. Many of them have still been without a degree in their thirties, and I have always encouraged them to complete their degrees,” Laura explains.

Laura herself is very much familiar with unfinished studies. Originally from Pyhäranta near Rauma, Laura moved to Tampere in 1993 and initially immersed herself in her studies, attending lectures from her small flat in the Koivistonkylä district. In a few years’ time, work had pulled her away to Helsinki, however, and the studies had fallen by the wayside.

Returning to the university from a public position at the age of 35 was not a simple matter. Thanks to her strong will, however, Laura completed her studies and graduated with a master’s degree in administrative sciences in 2007. Getting across the finish line sometimes required a drive to Tampere in the early hours of the morning and returning to Helsinki for a TV shoot immediately after the lecture. Even now, years later, Laura feels grateful for the warm welcome she got when returning to the university.

“Honestly, in my opinion, the specific subject you study is actually not that important –with the exception of medicine and such. All university studies provide an understanding of life and the world. The eventual work career will take shape along the way.”

Position: Communications Director for the Centre Party of Finland

Surprising fact: Originally from Pyhäranta near Rauma, Laura wrote her master’s thesis on Rauma’s rivalry city’s hockey team, Porin Ässät, reportedly being the first to combine regional science and sports in this context. The thesis explored regional identity at the core of the ice hockey fever in the spring of 2006.

Memory: Laura was just getting started as a summer reporter for YLE Sports in the spring of 1995 when Finland won the Ice Hockey World Championship. Laura was watching the final game with her fellow students at the Senssi restaurant in Tampere. She had put together her first news insert for YLE Sports earlier that day, and now had to keep working on it several times during the match, racing to the YLE facility in Tohloppi from the restaurant in her Saab 96. The rest is history. Finland won the championship and Laura’s first insert was never published. That spring marked the beginning of Laura’s long and successful career, nonetheless.