Our alumna Karoliina Korppoo: The kind of seeds of thought we plant in the younger generations is something we must carefully consider 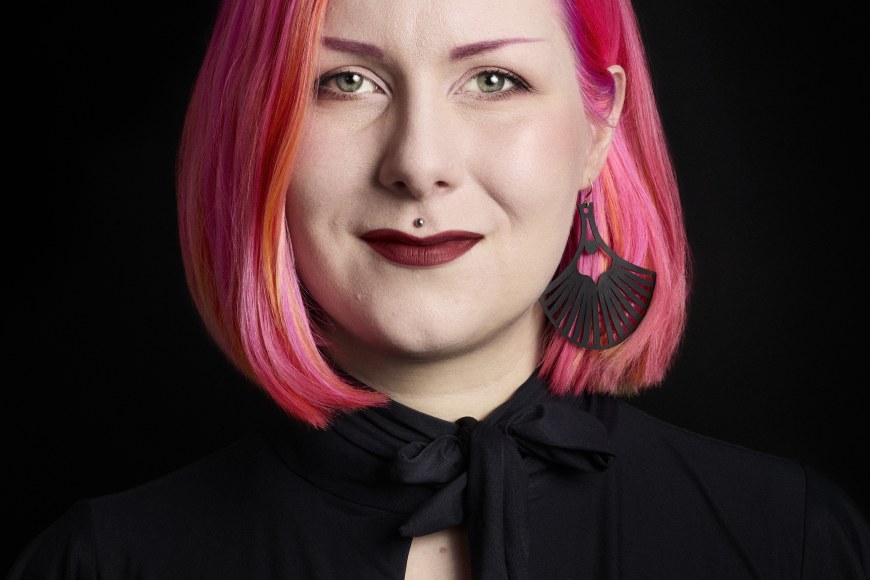 Karoliina Korppoo, a double alumna of Tampere Universities, is a well-known figure in the international gaming industry. She is currently busy developing a new type of interactive app for reading and writing stories for 10th Muse, a company she co-founded. The common thread running through her career is storytelling.

Karoliina Korppoo, 36 years, has a strong work ethic, an analytical mindset, an impressive track record of achievements and a commitment to abide by her personal values. A pioneer of a new type of storytelling, Korppoo is currently CEO and creative director of her company 10th Muse. She is part of a team of eight and developing an app that offers users a unique reading and writing experience.

Sana Stories is a mobile app for writing stories with interactive elements. The primary target audience is thirty-something women who enjoy romance novels and are avid readers looking for an interactive reading experience.

“The app has received an overwhelmingly positive response. Since we released the first version of Sana Stories on Valentine’s Day in 2020, we have consistently received excellent reviews from real users. As similar products are not yet available in the market, we are confident the app has international potential,” Korppoo says.

The Eek! award and bottles of ketchup

Karoliina Korppoo is a double alumna of Tampere Universities. She enrolled at Tampere University of Applied Sciences in 2004 to study graphic design and completed her Bachelor of Media degree in 2008. She entered Tampere University soon after in 2009 and went on to earn a Master’s Degree in Internet and Game Studies in 2015.

Korppoo has fond memories of her time at university, although she was busy working alongside her studies.   The resulting lack of time meant she missed out on much of student life.

“Back in the early 2000s, the graphic design programme at Tampere University of Applied Sciences was still largely focused on print media. However, the teacher of our only games courses invited several interesting guest lectures to our classes, and the collaboration with coders attending another course gave me my first taste of game design. The scriptwriting course was great, too: I learned so much about building and developing a narrative arc,” Korppoo points out.

Korppoo praises the enormous collection of loan items available at Tampere University of Applied Sciences for opening the door to creativity. She teamed up with some fellow students, all equally enthusiastic and eager to try new things, early on. Among other things, they shot a short film while still attending their first introductory courses as first-year students.

“This world of new possibilities gave me the feeling that I could do anything. The icing on the cake was us winning the Eek! award at the Yli-Ii Film Festival. The first prize was bottles of ketchup,” a smiling Korppoo reminisces.

Korppoo found her first job when she spotted an email sent to one of the institutional mailing lists: Universomo was looking for game testers.

“At the time, there was virtually no training available for wannabe game testers, and the candidates applying for the job were game enthusiasts without formal credentials.  I believe I landed the job because I took the game testing assignment that was part of the application process so seriously.”

Korppoo entered the gaming industry right on the cusp of its major boom in Tampere and stayed for a number of years. After leaving Universomo, Korppoo worked at Kyy Games, Colossal Order and Veikkaus, a government-owned betting agency in Finland.

Journey from the hit game Cities: Skylines to romance novels and TED Talk

The name Karoliina Korppoo is widely recognised for two reasons. First of all, she was the lead designer of Colossal Order’s Cities: Skylines, a game that became a major success. And second, she is one of two Finns to have been invited to give a TED talk at the main TED conference.

While developing Cities: Skylines, Korppoo was studying at Tampere University and soaking up knowledge about gaming.

“Besides my personal gaming experience, I wanted to utilise research-informed knowledge about the elements that work in different types of games – and why. What creates that magical connection between a game and a player? I have come to the conclusion that interactivity plays a significant role in this process.  An interactive story captivates us and becomes an experience we can cherish.”

Korppoo says that the knowledge she acquired while at Tampere University played a pivotal role, for example, when designing Cities: Skylines. Her studies gave her the idea to apply the sandbox theme and create a city building game where players start out with an empty plot of land and make progress independently at their own pace, much like a sophisticated version of playing house. The game is automatically adjusted to the player’s level, and there are no winners or losers.

The hit game earned Korppoo a coveted invitation to give a TED Talk at the main TED conference in 2017 themed The Future You. The person choosing the speakers said his five-year-old child gained a new understanding of cities and how they function while playing Cities: Skylines.

Karoliina Korppoo talks a great deal about values and how they can be conveyed through storytelling.  Korppoo spent her childhood years in the district of Töölö in Helsinki, Finland. The neighbourhood had an open atmosphere that embraced diversity.

“My best friend Mikko and I would often play He-Man. We both wanted to be He-Man, so we decided there could be two He-Mans. We did not think there was anything peculiar about it. It was not until later that I realised that some people find it odd that a girl takes on the role of a male character in a game – or vice versa,” Korppoo notes.

Her interest in diversity and feminism led Korppoo to minor in women’s studies at Tampere University.  According to Korppoo, the courses in women's studies were interesting, active class discussion was encouraged, and the quality of teaching was high.

“The courses reinforced my conviction that it is important to support diversity and inclusion. For example, the mobile app we are currently developing would lose some of its value if we had overlooked diversity while designing it.”

Games convey values, too, just like the structures and attitudes prevailing in the gaming industry. For example, when designing Cities: Skylines, Korppoo’s team set out to encourage the use of wind and solar power. The kind of seeds of thought we plant in the younger generations is something we must carefully consider.

“Although I have spent the majority of my career working in a male-dominated environment, I have generally felt like part of the team despite being a woman. But as I do have some personal experiences of having my ability to do my job questioned simply because of my gender, I make a conscious effort to promote openness and the values I find important. My current team is a motley group of professionals, all working together to achieve a shared goal.”